The Wedge     Graphite soundboard instruments    The Wabbit guitar    The Marimbola

Guitars can injure you. Just play them long enough. Hold a square box under your arm for a decade or two, for three or four hours a day and you will probably come down with one of a list of debilitating injuries which can cut your career short.   William's "wedge" concept was developed to help restart the career of a veteran singer/ songwriter with calcific tendinits. The story was covered by Acoustic Guitar magazine.
The wedge-shape configuration of the soundbox allows the player's arm to fall more naturally over the guitar. The unusual shape doesn't impede the instrument's ability to produce a full and satisfying sound, and non-injured players love its natural comfort.
Thus I have begun to produce a short-run line of pre-made "wedge" guitars  priced at around $2500. We're also currently prototyping a wedge design with the carbon fiber soundboard described below. Now there's a striking combination, fit for the millennium!

Besides the enormous stability and stiffness of the 1/32" composite material, it is stunning to look at: it has been described as looking like " black polished tweed marble," because of its gloss- lacquered woven outer substrate. The sound is exceedingly fine, besides: it has a remarkably loud, balanced and sustained sound which picks up smoothly and evenly. All in all, a superior substitute for very good soundboard spruce.

The Curly Koa/ Graphite steel-string guitar at left has been taken to several shows and conventions, where both the guitar and its innovative soundboard material garnered admiration and praise from everyone who saw and played it, including folks at Santa Cruz, Martin and Fender.

This particular instrument was purchased by an Atlanta guitarist and was valued at $3800. Currently we are designing and building a line of carbon-fiber soundboard models, made of mahogany and featuring besides the wedge-shape soundbox described above.

Thunderclap: the Wabbit Guitar: a collaboration

Notes from Flo & Rich's Tagyerit website "When a local farmer offered some walnut for sale, we hopped at the opportunity, until we realised that the tree was still standing. When we couldn't convince him to spare the tree, we agreed to buy some of the wood. During a conversation with friend and luthier William Cumpiano,  he responded, "Let's do it." to Flo's funtasy (sic) of building her own guitar. Thus Thunderclap was born. She is named after one of our rabbits who served as inspiration. With money from sales of CDs going to environmental organizations, we'd like to think Thunderclap will help rebuild some of those forests. If you happen on some walnut lumber, it is a wonderfully workable wood, but keep in mind, there is a growing list of sustainable, alternative woods. Visit the Good Wood Resource Center   for more information." 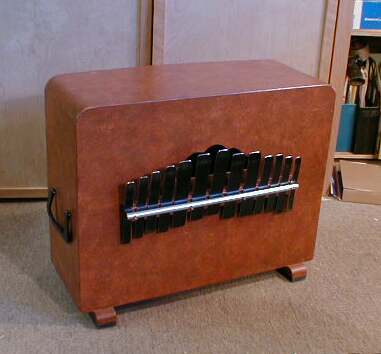 Betcha never saw one of these! It's a marímbola (Puerto Rico) or marímbula (Cuba), or rhumba box (Jamaica). Its the mother of all thumb pianos. You sit on it and pluck the steel "tongues" to get a deep powerful bass "thump." Although the early marimbolas had only a half dozen notes, this one can play an entire scale and then some. In its original form, it was virtually the only bass apparatus available to most Caribbean son and guaracha groups during the twenties and thirties (only the big bands could afford an upright string bass!).  I've always wanted to have one, having seen it in old photographs and in museums. So we made this one from ˝" plywood and 1/8" doorskin, braced to reduce many of the unwanted persistent resonances and focus its sound. My local steel supplier in Springfield, Mass., supplied (and cut) the spring steel "keys" or notes (the originals came from recycled coiled clock springs from wind up victrolas). My partner Harry  assembled it and gave it a faux leather finish. We finally sold it to a Hartford traditional Latino music band. Although it needs no amplification under normal circumstances, a padded port is provided in the back for a microphone. Want one? Only $700. Tell you the truth, I couldn't tell you where else to get one!

Listen to it here!